Studies continue to emerge linking meat-centered diets and chronic disease. If plant-source-only eaters have less chronic diseases than meat eaters, why don’t they live significantly longer? One of main reasons for this is carnosine deficiency. Carnosine is two amino acids, L-histidine and alanine, linked. It acts as a very powerful antioxidant. Most importantly, it prevents glycosylation – one of the main factors in aging.

Vegans are low in carnosine. Actually, they don’t have any because carnosine comes from meat. However, meat eaters don’t get enough carnosine either! A recent study showed that when people ate 7 ounces of meat (a big steak), carnosine levels increased 448 units, but after 5 ½ hours no carnosine was detectable. This depletion occurs because there is an enzyme in the body that breaks down carnosine in a way that would require you to eat 7 ounces of steak three times daily to get adequate carnosine from a meat source! So, meat eaters are also deficient in carnosine, but not as deficient as vegans. Research is suggesting that we need at least 1000 milligrams of carnosine daily to overcome this enzymatic reaction and to reach carnosine levels that are adequate to protect the body against glycosylation, aging, and to protect the brain and body against diabetes.

When proteins are glycosylated, they give off 50 times more free radicals. Free radicals are one of the driving forces behind aging because they oxidize the system. You could try eating three steaks a day, but that’s not so healthy and dramatically increases your potential for chronic disease. The solution is simple.  There is a readily available, easy-to-use source of vegan carnosine. We recommend this for meat eaters, too, since everyone needs it.

Many people have heard that vegans are low in vitamin B-12. That’s absolutely true. Meat eaters are deficient, too. There is a minimum level of B-12 you need to survive and a maximum level that is optimal for long-term health. It is likely that 90 percent of meat eaters and vegans are deficient at optimal levels. The best thing for everyone is to take a B-12 supplement. When I was at Columbia Medical School in the 1960s, they did a study that found that 30 percent of people judged to have adequate B-12 levels (mostly meat eaters) had dramatically positive responses to getting B-12 shots. Depression went away, and a sense of well-being was reported in many study participants. Even in the 1960s they knew that on average people are low in B-12. I just want to emphasize the point that everybody is low in B-12. Why is this a big deal?  People who are B-12 deficient have more brain shrinkage. With age, your brain begins to shrink. We can protect against this with B-12 supplementation.

Vitamin D helps protect you from 50 to 70 percent of cancers, diabetes and halves the percentage of babies being born prematurely. We know that 100 percent of kids under one year old are vitamin D deficient. Vitamin D provides protection against flu. It also facilitates healthy brain function and cognition. Research suggests meat eaters and vegetarians – somewhere between 50 to 85 percent – are deficient in vitamin D. Everybody needs to take a vitamin D supplement, whether you’re a meat eater or vegan. Along with vitamin D, vitamin A helps vitamin D work better. Vitamin A, vitamin D and vitamin K work together. Vegans and meat eaters tend to be low in vitamin K.

Let’s look at Vitamin A as an example. Between 27 and 46 percent of people in the population have very poor conversion of beta-carotene to retinol (the usable form of vitamin A). Individuals supplementing with beta-carotene are only getting a 9 percent conversion into its essential, useable components. If you’re part of the approximately 40 percent who don’t convert, you won’t get enough vitamin A. We need vitamin A for a good immune system, so vitamin A supplementation is crucial.

At this time, we don’t have a really good vegan source of vitamin A, but we’re in the process of developing one. What’s missing is a particular enzyme that converts beta-carotene into retinol. Roughly 40 percent of the population is low in this enzyme. A synthetic retinol is available, but studies aren’t all that clear in terms of long-term health benefits. Synthetic substances are generally not ideal sources of nutrients. We are currently figuring out a non-synthetic, vegan supplement that will be available in the future.

What about magnesium? Eighty percent of the population is low in magnesium. In 1936, the U.S. congress found that 99 percent of the U.S. population had some mineral deficiencies. Whether a meat eater or a vegan, it’s clear there is a need for general mineral supplementation. Simple things that are concentrated, like Ocean’s Alive marine phytoplankton, are great sources of magnesium and other essential nutrients.

Other important nutrients to consider are omega-3 long-chain fatty acids. Research shows 90 percent of pregnant women are deficient in omega-3. Docosahexaenoic acid (DHA) is an omega-3 fatty acid. We see a high incidence of depression and post-partum depression in individuals who don’t get enough DHA. Babies who don’t get enough DHA have poorer brain development and poorer vision. Meat eaters and vegans are deficient. Since 2.6 percent of the population is vegetarian and 0.05 percent is vegan, it’s safe to assume a population study that shows pregnant women are deficient includes predominantly meat eaters. Where should we get DHA? Fish oil has 2 percent of DHA, but it gets rancid, and anything from fish is highly contaminated with pesticides and herbicides. Where do fish get omega-3? Golden algae. You can easily get enough omega-3 with supplements like Omega Zen or V-pure.

The most important thing to keep in mind is that neither diet is adequate without supplementation given what’s going on in world. Everyone needs B-12, carnosine, vitamin D, vitamin A, DHA and magnesium including meat eaters. The optimum diet is one that makes you a superconductor for the Divine. That means adhering to at least an 80 percent live food, plant-source-only diet.

try these Vegan recipes for a healthy diet 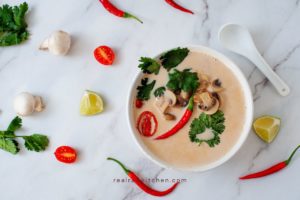 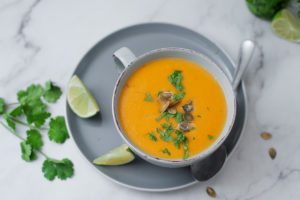 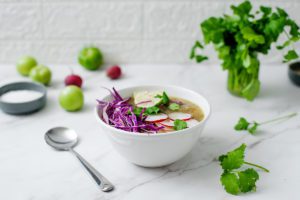 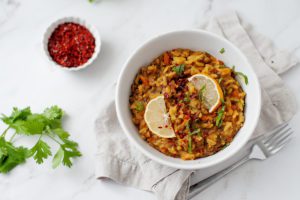