You are here: Home / Desserts / RECIPE: almond joy bars, a beauty food
I have been dreaming about these bars for quite some time. I kept putting it off, though, because I was afraid my hubby wouldn’t like them (he hates shredded coconut). And since he is the one that usually eats up everything I make I didn’t want to have a dish full of almond joy bars just for myself.
Finally, I decided enough was enough. I decided I would make what I wanted, when I wanted. And I decided that if he didn’t like them, then tough. Because he’d have to be crazy not to.
So I jumped up, went to the kitchen, and started on my project. He casually asked from the other room, “what do you have goin’ on in there?” I responded, point-blank: “I’m making Almond Joy Bars.” Knowing his disdain for the traditional candy and anything that contains any trace amount of shredded coconut, I prepared myself to stand strong against his protest. Instead, he just quietly nodded like the supportive partner he is.
Finally, when they were ready to eat, I offered him a piece, anyway. Even though I was prepared for the worst, there was a small part of me that was hoping I could convince him they were delicious (I mean … they ARE delicious, so he just had to agree …) I ate half of a bar, handed the other half to him, and walked away to put the rest in the fridge. After I finished chewing I groaned, “those are so good”. And you know what he said??
Yeah, they are really good.
I stopped in my tracks. If I could convince the man-that-doesn’t-eat-shredded-coconut to actually confess his love for a dessert with the contemptible shredded coconut then it must be divine. (seriously, he hates the stuff)
So I present to you: The best Almond Joy Bars (practically) ever. Because who am I to say there aren’t better ones out there? Though I’d be so happy to find some because then that would be pretty incredible.
You know what’s cool about these? They are actually really good for you. Of course, eat in moderation, but they are low in sugar and high in incredibly healthy fats. Given that they are dessert, it’s pretty incredible what sorts of goods they actually contain.
Almonds:
Coconut:
Cacao: 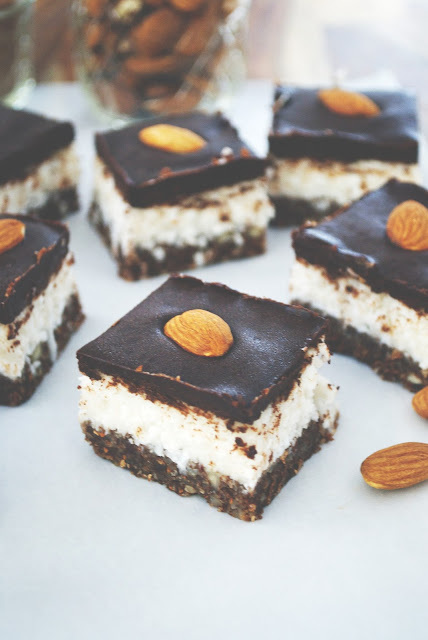 Chocolate base:
a recipe
1 cup almonds, soaked
4 medjool dates, soaked
2 T cacao
pinch salt
1/8 t vanilla
Soak the almonds and the dates for at least 30 minutes. Then peel and pit the dates and put them in a food processor. Add everything else and process until the dough is sticky. Do not over process or it will be too mushy.
Coconut Center:
a recipe
1 whole coconut meat
2 T coconut butter, melted
2 T maple syrup (not raw)
1 ½ cups unsweetened coconut shreds (raw, if you can find it)
Scrape the meat out of a coconut (see video below) and put in the food processor. Process until completely smooth and a butter is almost formed (5-7 minutes). Scrape down the sides as you go. Add the coconut butter and maple syrup and process until smooth and incorporated. Dump contents into a bowl and add the coconut shreds. Mix with a spoon until incorporated.

Place everything in a small bowl and, using a fork, mix everything until well incorporated.
Assembly:
These are so delicious and not too sweet. I loved them and so does everyone that tries them. They are such a nice treat and actually a great energy booster, to boot. If you try them out, let me know what you think!!
xo