You are here: Home / Desserts / RECIPE: blueberry coconut cake
This was one of those recipes where I just really wanted to use my blueberries and I really wanted to use my coconut. I didn’t know what to do except I knew that I really wanted them together. I kept it simple because I don’t like complicated things, in general, but also because I truly believe that the way to make a healthy lifestyle liveable is to make it more approachable. A recipe with a thousand steps or ingredients is definitely not approachable … ( don’t worry, I’ve got those for you, too, here, here, and here.) 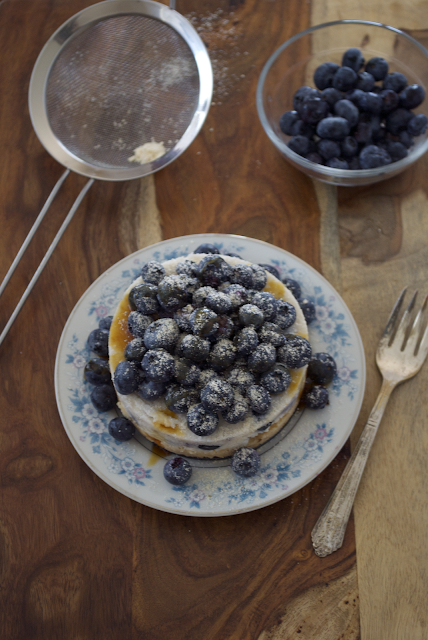 All I could think was “blueberries and coconut .. blueberries and coconut” and so what did I do?? I made an extremely simple coconut cake and just tossed some blueberries in there. Done. I don’t regret the simplicity one bit, either. A lot of times the fun in making a raw dessert is by getting extremely creative and making it fancy. However, I don’t have time for all that fancy stuff in my daily eats. I wish I did because I love having a fancy meal just like anyone else, but I just do not.. and I think that’s okay because it keeps my recipe development in check for you, whom I’m sure have a lot on your plate, as well!
The funny thing about this is that I was so conflicted. I couldn’t help but doubt the simplicity of it all. Was it really that easy?? So I made one mini cake and then saved the remaining batter for something else, something I would be sure to fancify when I had a moment and really show off my raw prowess. I put it away, dutifully, in a container and stuck it in the fridge. I snapped some pictures of the cake and then split it with my hubby. He announced that not only did he approve but that he loved it. We didn’t quite finish it, so I stuck that in the fridge alongside the extra batter, and told him it was there for him whenever he wanted it. I went about my day only to return home to find that he had eaten the batter and not the leftover cake!! I was so sad. There was so much of it and all of it had been eaten up by my hungry little monster. He seemed so proud, telling me how delicious it was and that he loved it and could have had more …
Well … Now nobody will have more but I feel fully satisfied that a recipe really could be that simple and still be spectacular. Coconut Crust:
a recipe
2 T coconut flour
3 T water
1 T maple syrup
1/8 t vanilla
Mix everything with a fork until a dough is formed. Put the dough into a single serving spring form dish and press down until firm.
Coconut Cake:
a recipe
1 cup coconut meat
1 T maple syrup
1/8 t vanilla
Place everything in a food processor and process until smooth and a creamy almost-butter is formed. Place the contents into a bowl and fold in the fresh blueberries.
Garnish
1 cup blueberries
coconut nectar
coconut flour
Put the coconut mixture with the blueberries on top of the crust and smooth. Place in fridge until firm. Garnish with fresh blueberries, a drizzle of coconut nectar and a sprinkle of coconut flour.