You are here: Home / cheesecake / RECIPE: guava cheesecake
It was my father-in-law’s birthday this weekend, so I jumped at the opportunity to create something delectable. My in-laws hail from tropical countries and have spent most of their lives here in Miami. So tropical fruit is the go-to treat in their household. So when I sent my birthday wishes I also asked if there was anything in particular he’d like on his special day. The request?
“Anything with guava in it.”
I have to admit I wasn’t exactly excited about this challenge, but I accepted it nonetheless. The “guava” that is so popular here is actually hardly guava at all. It’s actually more like a gelatinized guava-ish block of sugar that is usually served with a slice of cheese. It’s a real treat here that many people enjoy, and for good reason. The pair together is a unique and oddly delicious dessert that somehow just works. This block of sugar-guava, though, is the only guava experience I have had thus far. So I wasn’t quite sure how to even work with guava, what flavors it paired with, or (admittedly) what it even looked like in the whole fruit form. 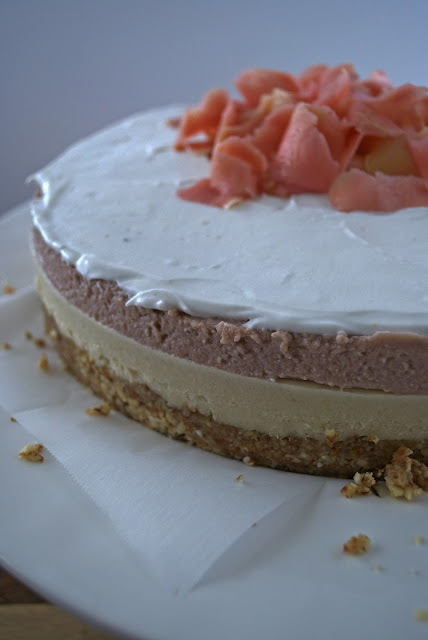 So I went to the one place I knew (okay, assumed) had guava, Palacios de los Jugos, because, well, it’s about as tropical a place you can get without actually leaving the U.S. I filled a bag with the fragrant fruit and hoped that I had grabbed the right one (I Google-checked the fruit once I got home).
Luckily, I had grabbed the right fruit. From there, the rest was history. I wanted to mimic the traditional guava and cheese combo with a guava cheesecake, but raw-ified. It worked easily and made for a beautiful dessert. This was a lightly flavored cheesecake with a strong guava layer that tied everything together.
And if you live in any other part of the country (or non-tropical climate) and do not have access to guava, swap it out for raspberries or strawberries! Just as delicious and pretty. 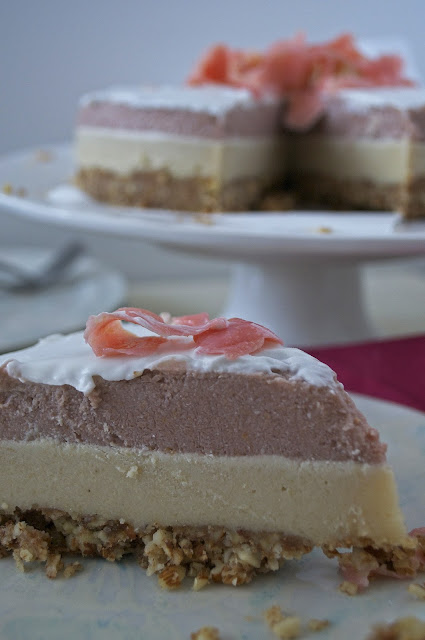 a recipe
3 cups almonds, soaked
1 cup dates, soaked
2 T coconut oil
1 T vanilla
1 t sea salt
Pit and peel the dates. Put everything in a food processor and pulse until crumbly and sticky. Press into the bottom of an 8″ springform pan and set aside.
Basic Cheesecake Filling:
a recipe
3 cups cashews, soaked
1 lemon, juice and zest
3/4 cup maple syrup (non raw)
3/4 cup coconut oil
1 tablespoon vanilla
Up to a 1/4 cup of water, if necessary to facilitate blending
Place everything in a high speed blender and blend until completely smooth. Use the tamper to facilitate blending, as needed. Pour over the crust, smooth out with a spatula, and set in the freezer for an hour or so to set. It needs to be set enough to withstand the final guava layer.

Blend everything in a high speed blender until smooth. Use a tamper as needed to help facilitate blending. Pour over the cheesecake layer and set in the freezer to set for a few hours.
I topped it with some coconut cream and shaved guava. It was creamy and the overall flavor was such a delicate balance between the cheesecake and the guava.
YUM! It is an incredibly dense dessert so share with (many) others. Or, cut the recipe in a half or by a third to make a smaller version.