Skip to content
I’ve made several attempts at a Pad Thai dish, both raw and cooked, and I’ve mostly been unimpressed. Sometimes it would taste like I was eating a pile of crispy veggies (which is great but so not pad-thai-style) and other times it was like a big saucy soup with a few wilted veggies in the middle.
THIS time, however, I was wowed by my creation and I wish I could take credit for it but I cannot. I followed Chef Amber Shea‘s recipe and it was so simple but so delicious. Even my omnivorous Significant Other loved it (yes, loved it).
If you wanted to you could use rice noodles or soba noodles instead of kelp noodles and it will still be delicious and high raw… 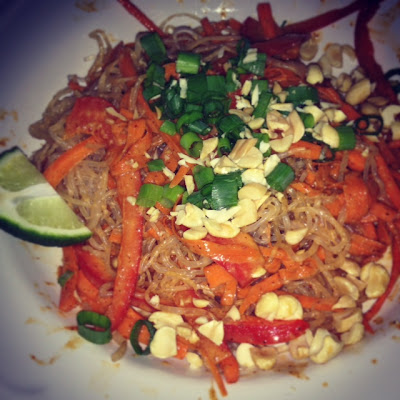 For the almond butter sauce:
1/4 cup almond butter
1/4 cup tamari (I used Nama Shoyu)
1 T sesame oil
1 T rice vinegar
1 T agave (I used honey, raw but not vegan)
1 garlic clove
1/2 t ground ginger
1 t sriracha hot sauce
For the noodles:
1 bag kelp noodles
2 medium carrots, peeled and cut into matchsticks
1 large red bell pepper, cut into matchsticks
3 green onions, thinly sliced
1/4 cup dry cashews (admittedly, I used peanuts)
2 T sesame seeds
1 lime wedge
Drain and rinse the kelp noodles and then pour hot/near boiling water over them and let them sit while you prepare the rest.
Cut your veggies and combine in a bowl. I made matchsticks out of one carrot and peeled ribbons out of the second. I loved it that way, it added a nice, smooth element to the dish.
Combine the almond butter sauce ingredients in a high speed blender and blend until smooth. Pour over the bowl of veggies.
Drain the kelp noodles and add to the bowl. Garnish with green onion and peanuts. Squeeze lime over the top and enjoy.
Seriously so good. I will probably be making it again, soon.