Skip to content
The weekend is always such a great thing for me. I treat it like my own personal, mini vacation where I retreat to a pseudo-oasis in my own home. My bathroom turns into a homemade spa and my outings turn into little adventures. I love the weekends and most weekends I feel so replenished at the end.
This weekend was a little different for me, mostly because I made the biggest mistake a person can make on the weekend: I used it to catch up on things I hadn’t accomplished during the week.
My #1 rule for the weekend, always, is to use it to play. If you don’t have some serious me-time over the weekend, then when will you have it?? I purposefully leave work at work so all I have to do at home is have fun. However, this weekend consisted of certain duties and obligations and so what resulted was a very uneventful and forgettable weekend for me.
This weekend was so promising, too. It started out wonderfully at a 5 star spa in Miami, thanks to Miami Spa Month … the only month where I ever do 5 star anything. 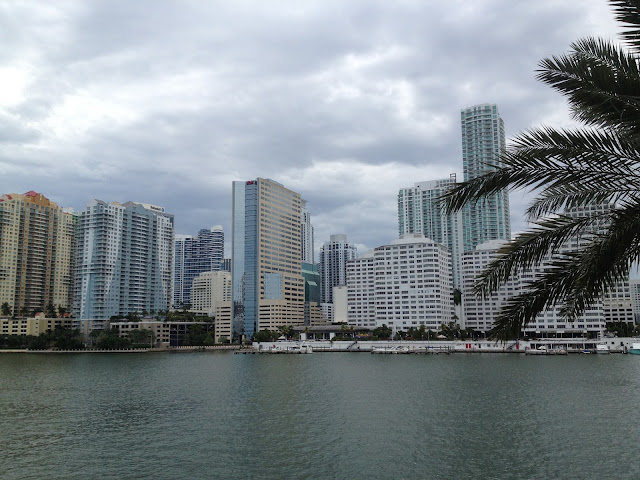 The spa overlooked the city, which is always a magnificent view, and had such a tranquil atmosphere. Incense burned throughout the halls and natural essential oils were used for the massage. The steam room and sauna room were to-die-for and I, admittedly, spent most of my time bouncing back and forth between the two. 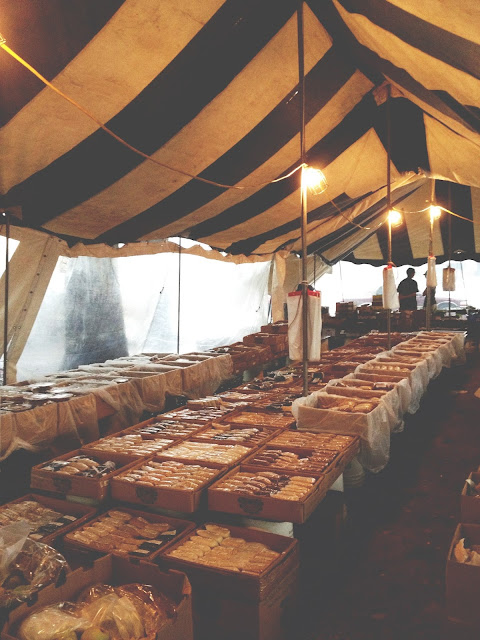 Then the adventures began with my excursion to the farmer’s market. I enjoy this weekend ritual, immensely, and I still think this was such a fun and unforgettable trip. But it sucked up a lot of my day and left me feeling rushed the rest of the weekend since I couldn’t get much else done.
I became trapped under the tents of the market by the absolute downpour that rolled in. As I was walking into the market a friendly man from the neighborhood said to me, “I notice you forgot your umbrella”. I laughed, glanced up at the big, black cloud that lingered above us, and said “well I’ll have to hurry!”. He laughed too, probably because he knew no amount of “hurry” would get me out in time. 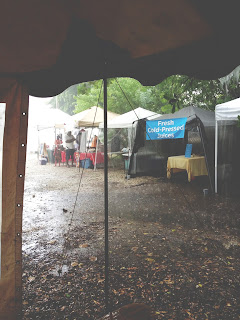 Before I knew it I was trapped. The thunder, lightening, and rain trapped all of us shoppers under the tent and all of the hopeful shoppers in their cars. I chose to wait for it to pass, since it usually does, and stood off to the side to watch the few brave people dart out into the darkness (at 11 a.m., nonetheless).
After about 30 minutes the tents started to cave in from the water. The floors became flooded and I had to hike up my dress so I could stand in the puddles. People started to get grumpy as we all got more and more wet. Finally, after evaluating my body and realizing that I was already pretty wet even though I was tucked away under the tent I thought I might as well make my way back to my car … if I’d be wet, anyway, then what’s the use in waiting around?
I tied my dress up by my thighs, rolled my paper bag of market goodies as tightly as I could, and then darted out into the rain. I made it no more than 2 feet and I could feel that every inch of me was already drenched.
I got trapped in the parking lot by the enormous puddle (pond??) that made me slowly wade through to the other side. I finally made it out of the lot and onto the street where I parked. At this point I stopped running because it was no use anymore and instead just looked around. From what I could see from the droplets dripping off of my eyelashes I was the only person brave (dumb?) enough to be out in the storm at that time.
The entire experience suddenly became so liberating.
I started laughing at the absurdity of it all; at the fact that I had even tried to move quickly to avoid getting more wet, and the fact that I was in the middle of the flooded street, alone, laughing. I walked to my car in complete surrender, letting the rain just pound on my every inch of my body. When I got to my car I plopped into the seat, shut the door, and just laughed some more. I turned on the engine and began to drive and within minutes the rain had completely stopped, the dark cloud almost evaporated, and I was met with sunshine as if that entire scene had never happened. 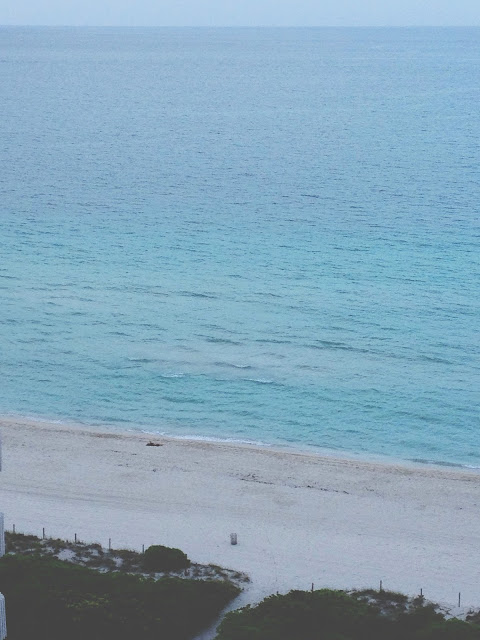 We made our way to the beach last night and I spent some time in the calm waters, hoping to salvage the weekend with one last “ahhh” moment. The weather in Miami is crazily temperamental and I was able to experience many, many sides to it in the course of one 24 hour cycle.
If you live in a tropical climate then you know exactly the rain I’m talking about. If not, or you’re like me and grew up in a temperate climate, then this kinda of weather is really astounding. It is one of the most impressive acts of Mother Nature I can fathom and I’m usually in awe by it more than annoyed (except for when I have to walk through the rain at work … then I’m less in awe)
How was YOUR weekend? Were you able to relax?? I hope so 🙂
xo

I’m not quite sure what’s happened. I can’t decide if it was caused by my recent…

Baby oh baby As per the words of one particular friend, there is a sick obsession…

This weekend was just so incredible. It was slow, easy, insignificant and exactly what I needed….